Kentucky has several hundreds of acres of stone fruit in production; thus, it is an important industry and source of revenue.  The peach crop is the most important stone fruit crop in the state.  According to the U.S. Ag Census, peach acreage in Kentucky declined during the 1990’s from 800 acres in 1992 to 590 acres in 1997.  Numbers of acres devoted to producing peaches in the following decade reached 584 acres in 2007 and 749 acres in 2010 so it has become a growing industry in the state.   Apricots, sweet cherries, tart cherries, nectarines, and plums are also produced in Kentucky although 30 acres or less were planted with each of these crops as of the Ag Census in 2007.  With the peach industry rebounding in Kentucky, it is necessary to safeguard this growing industry from potential pest problems.

Several insect pests would be very damaging to the stone fruit industry in Kentucky if they became established in the state.  Many insects can be surveyed using pheromone trapping.  The use of these traps allow for early detection and prevention of pest establishment in the state. 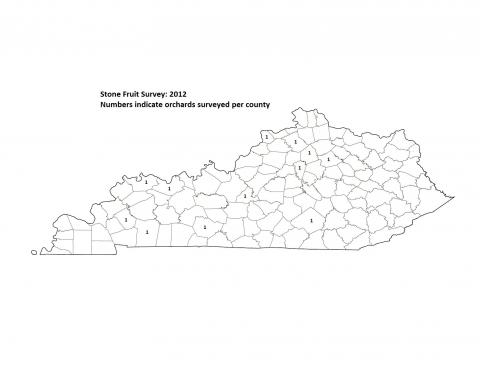