Inula britannica L. (British Elecampane, British Yellowhead, or Yellow Starwort) is a rhizomatous perennial or biennial in the aster family. It is now widespread in the Old World, occurring from Japan to Spain and north to Scandinavia and Siberia.  This plant occurs primarily in moist habitats including ditches, stream banks, wet woods, and moist meadows. Inula britannica has become an aggressive weed in field-grown hostas in the Netherlands, and now its recent detection at several hosta nurseries in Michigan has led to concern over its potential as a weed in the United States. It apparently arrived in contaminated Dutch hosta and daylily liners.

Inula britannica spreads aggressively, and is difficult to remove from infested nursery crops. Its roots and rhizomes become intertwined with the root systems of field-grown hostas in the Netherlands, and remain even after the hosta rootstocks are washed. Inula britannica seeds and rhizomes probably move locally on machinery and hand implements, and the seeds may also be moved by wind. Movement as contaminant materials in hostas grown in infested nurseries in Michigan is also a possibility. These characteristics indicate this weed could easily become established in Kentucky if it were introduced through imported nursery stock.

Hostas and daylilies are two of the most popular plants for landscaping, so most nurseries and garden centers in Kentucky stock a large supply. Thus, the potential for an infestation is high.

Two surveyors visited nurseries, garden centers, and landscaped areas to look for Inula spp. during 8 weeks from May through June. 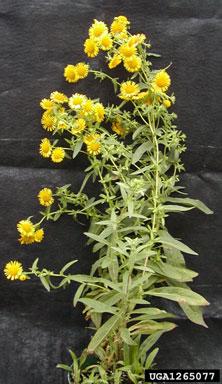 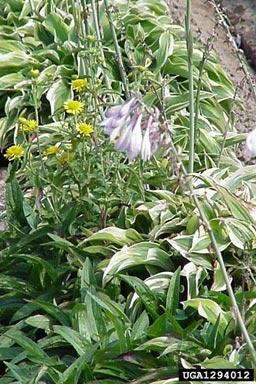