The gypsy moth has recently (2021/2022) been officially renamed the spongy moth. This moth, Lymantria dispar, was 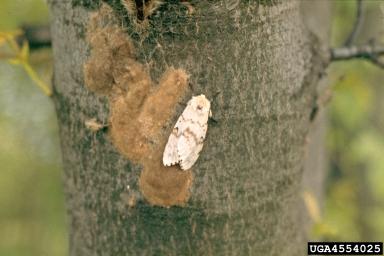 accidentally introduced in Massachusetts in 1869.  The first outbreak occurred in 1889.  By 1987, the spongy moth was established throughout the northeastern United States.  Spongy moths are not established in Kentucky, but are established in the surrounding states of Virginia, West Virginia, Ohio, and Indiana.  From 2000-2002, West Virginia experienced record defoliations that totaled over 1 million acres.  These insects are so destructive because the caterpillars can fed on more than 500 trees and shrubs.  Oaks are a preferred host while apple, sweetgum, basswood, gray and white birch, poplar, willow, and hawthorn are also favored.  Older instars can feed on hemlock, pines, and spruce.  Caterpillars are recognizable since they have five pairs of blue dots and six pairs of red dots on their back and are very hairy.

Adult female moths are large, white, and flightless while males are smaller, brown in color, and can fly.  Natural dispersal occurs over short distances when larvae send out silken strands that allow them to be blown by the wind.  However, spongy moths have been able to move long distances on outdoor household articles such as cars and recreational vehicles, firewood, and household goods.  Females often lay egg masses on such articles which are then transported long distances by people. 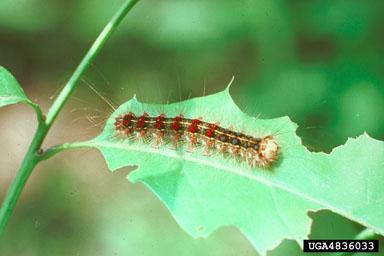 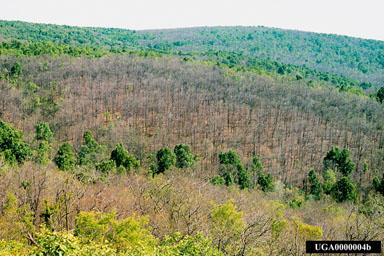 Some spongy moths are found every year in Kentucky.  However, there are no established breeding populations in the state and we are working to make sure this insect does not become established.  A map of counties in other states which are under quarantine due to spongy moth can be found here.

Every year spongy moth traps are set throughout the state of Kentucky.  These traps contain a synthetic female spongy moth sex pheromone which will attract the male moths.  We participate in a statewide survey as well as the Slow the Spread program which focuses on slowing the naturally-advancing spongy moth front.  The state has trapped for spongy moth since 1983.  Since then, three infestations have been discovered and eradicated using techniques such as 1) mass trapping in which a very large number of traps is concentrated in the infested area, 2) application of nucleopolyhedrosis virus (Gypchek®) which kills only spongy moths, and 3) banding trees with burlap bands treated with insecticide to kill caterpillars. Thus far our extensive monitoring program and eradication techniques have prevented this damaging pest from becoming established in Kentucky. 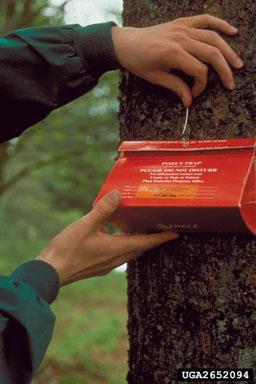 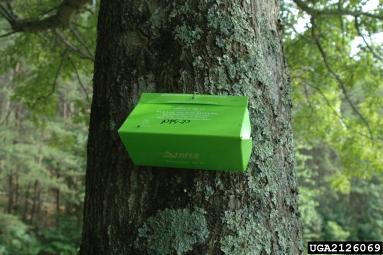 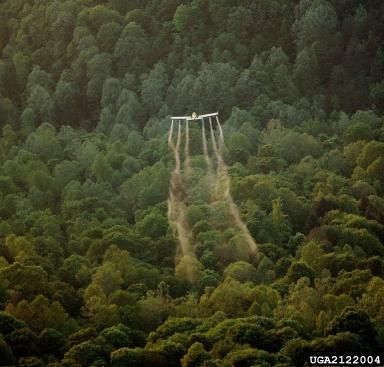