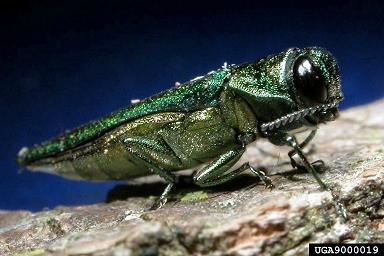 Emerald ash borer (Agrilus planipennis) is a small (1/2 inch long and 1/8 inch wide) bright green beetle that is native to Asia.  It was discovered near Detroit, Michigan in 2002 and has since killed more than 15 million ash trees.  Large infestations are concentrated in Michigan and Ontario, Canada, but smaller infestations have been found in Ohio, Indiana, Maryland, and Virginia.

Adult beetles emerge from May-July and the females lay eggs on ash bark.  Eggs hatch in 7-10 days and tunnel into the vascular tissue of the tree creating serpentine galleries and cutting off the flow of nutrients to the tree.  Ash trees attacked by this beetle will typically die in 1-3 years.

These beetles can fly, but will only fly short distances of about 1/2 mile per year.  Humans are unwittingly transporting this destructive pest in ash products such as branches, logs, wood chips larger than 1 inch, nursery stock, and firewood.  Shipments of ash nursery trees and ash logs with bark are now regulated out of quarantine areas. Transporting firewood outside of the quarantined areas is illegal, but many people are not aware of this restriction. Transport of infested firewood remains an ongoing concern.  Please do not move any ash firewood or logs!!  Help keep this beetle out of Kentucky.

One visible sign of an emerald ash borer infestation is crown thinning and dieback in an ash tree.  Branches at the top of the crown will die and more branches will die in the following years.  This symptom typically appears after one year of infestation. 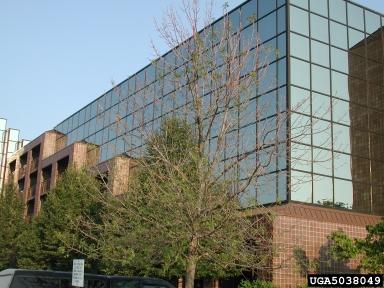 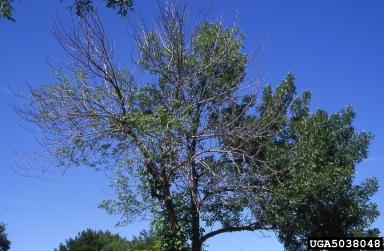 Epicormic shoots, or suckers, are a typical sign that a tree is under stress.  These suckers are wild, leafy shoots that grow out from the tree's lower trunk.  Ash trees will send out these epicormic shoots when under stress from an emerald ash borer infestation. 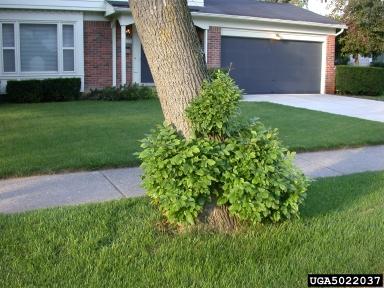 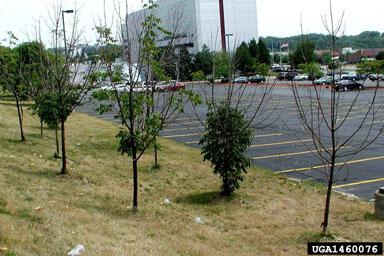 When adult emerald ash borers emerge from the trees, they have a flattened back and a rounded belly.  Thus, their emergence holes have a characteristic "D" shape.  These holes are only about 1/8 of an inch in diameter.  They can appear anywhere on the trunk or upper branches of the ash tree. 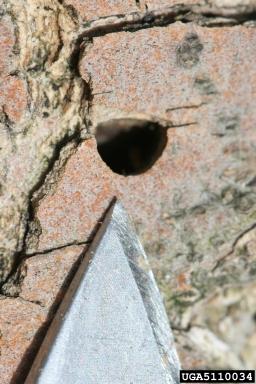 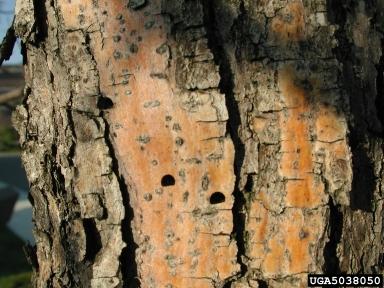 As the larvae feed under the bark of the ash trees, in the vascular tissue, they create meandering S-shaped galleries.  This symptom is only visible if the bark is peeled away.  Sometimes galleries will cause a noticeable vertical split in the bark.  Such a split could be a sign that there are larval galleries under the bark. 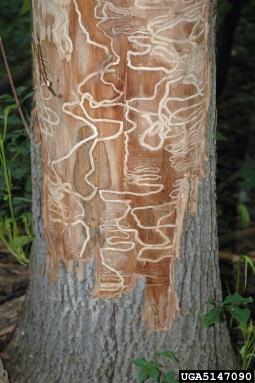 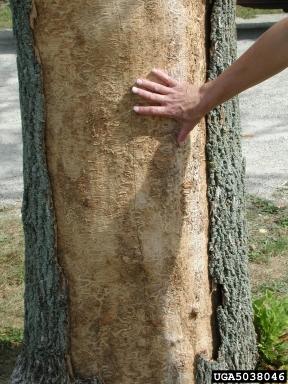 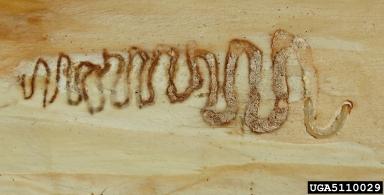 Increased woodpecker activity is a sign of emerald ash borer infestation since the birds like to feed on larvae developing under the bark.  Downy and hairy woodpeckers, in particular, are important predators of the beetle larvae. 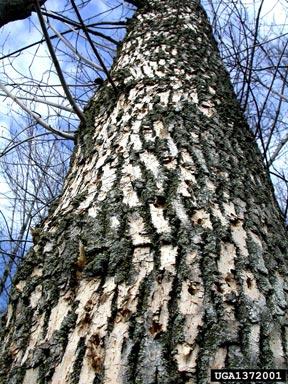 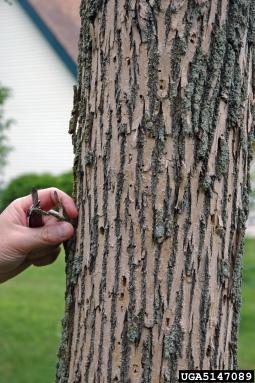 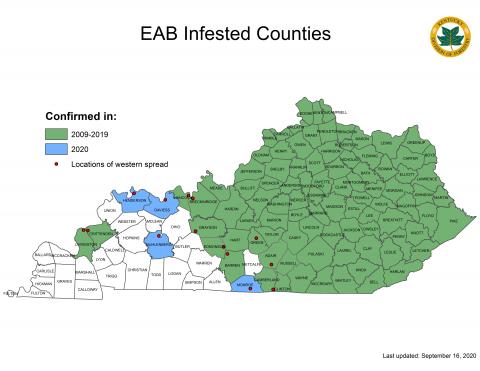 The entire state of Kentucky is under a federal quarantine to restrict the movement of ash products including nursery stock, logs, lumber, wood chips, and firewood.  You can visit the UK Entomology Emerald Ash Borer Page for more information.

The website www.emeraldashborer.info has excellent information for homeowners who are concerned about their ash trees.

In October of 2006, 2-3 ash trees (> 6 inches in diameter) were prepared as trap trees by girdling them at chest height.  A band of plastic wrap was placed above and below the girdled area.  This plastic wrap was coated with tack-trap.  Wounded trees give off volatiles that are attractive to emerald ash borer which are then trapped on the sticky bands.  The girdled trees were located in campground areas of state parks. Sticky bands were inspected every 1-2 weeks from May to September.  These trap trees were used for 2 years then felled and dissected to inspect for larval galleries.  We did not find any EAB using trap trees. 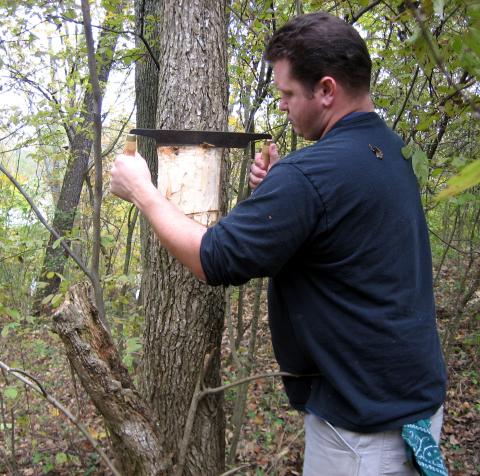 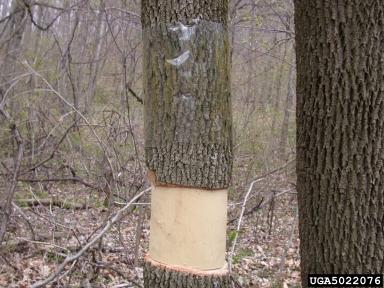 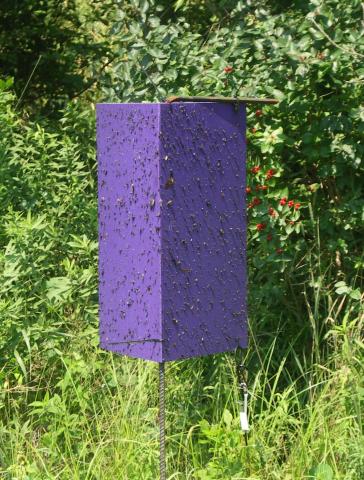